Our second hiking day begins in the district of "La Calera". We hike up through the narrow streets in the village until we reach the antenna mast directly above the village (waypoint 1). From here, the path leads us over four stone steps to a signpost, where we meet the officially designated path GR-132 (waypoint 2), which leads up here from the main road. If you didn't stay in "La Calera" but further up the valley, you can get on from there.
The ascent that follows is arduous and worthwhile at the same time: it offers an unbelievable panorama of the green river delta of Valle Gran Rey, the deep blue sea and the mighty rocks of the island. Accordingly, this hiking route is well frequented. After about 1:45 we reach the viewpoint "Riscos de La Mérica" (waypoint 3), which can be recognized by a single tree and can be reached at the end of the ascent in a short, comparatively flat section. At the edge of the rock massif we have a view of both valleys: the Valle Gran Rey and the adjacent gorge with its ocher and reddish rock tones.

We leave the vantage point past the tree in a northerly direction and the path becomes much more lonely. We hike for some time along the western edge of a plateau covered with bushes and towards two flat rocky outcrops. The path leads between these two and joins the slightly wider path that ran along the eastern edge of the plateau (waypoint 4). From here we have a view back to Valle Gran Rey and large parts of the route that we covered in stage 1.
We follow the path along the ridge and always get great views to the left and right: with good visibility we can see the neighboring island of "La Palma" with its two elevations on the horizon. The views of the uninhabited side valleys towards the sea and the valley of Taguluche are also very spectacular.

In the distance we can already see the white houses of Arure, which we reach about 3:00 a.m. from the start. At the first houses of Arure we enter a paved road. After a left turn, the GR-132 branches off in the direction of "Alojera" and leads under an archway (waypoint 5). Here we will start again tomorrow in the GR-132. Today, on the other hand, we decide to spend the night in "Las Hayas", which is a little off the GR-132 path and accept a small detour, so we continue to follow the paved road to the center of Arure. Here you can take a break in one of the two restaurants in town. The restaurant "El Jape" (waypoint 6) is very popular with hikers, which becomes visible when hiking into the village on the opposite side of the gorge (recognizable by the parking lot in front of it or by the "Tienda del vino" written in large letters right next to it). The operators of the restaurant "El Jape" rent two small holiday apartments called "Rural Gomera" in town - sometimes on a daily basis (Link: Rural Gomera). One of them is set back from the road directly to the right of the restaurant, the other about 300 m from the restaurant (Location on Google Maps).

The island bus line no. 1 also stops right in front of the restaurant "El Jape" - so there is a direct connection to San Sebastián or back down to Valle Gran Rey. If you want, you can use this point to start the circular hike (start with stage 3) or to get off.

All other downloads can be found at maps. 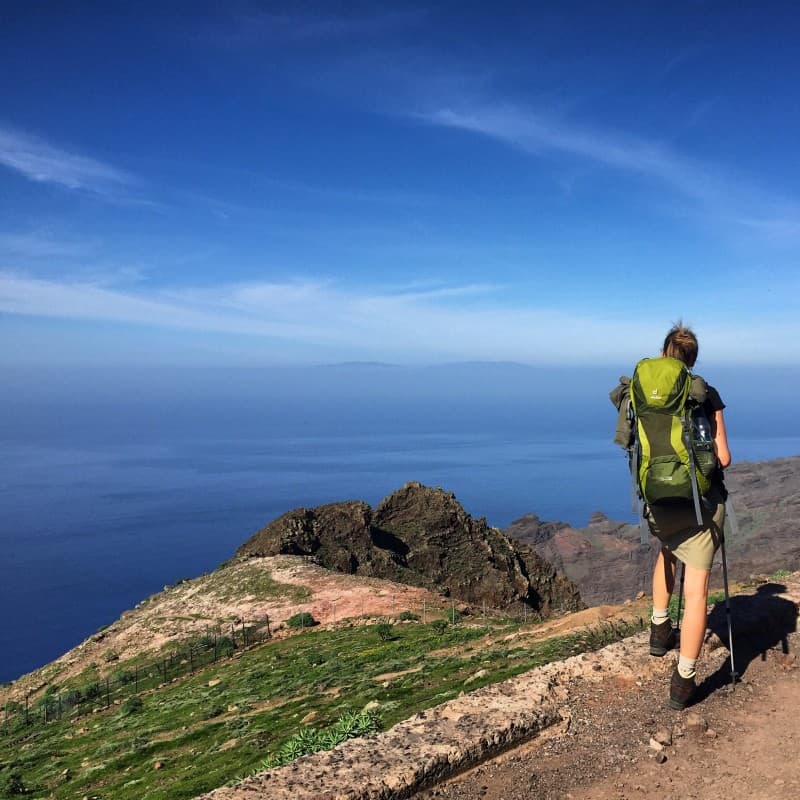 From Arure to Las Hayas

From Arure, several paths lead to "Las Hayas", each of which is well signposted. So it's quite possible that you get lost in the signposts and get to "Las Hayas" on a different route than the one described here. That's not bad: tomorrow we'll have the opportunity to try another way back to get back to the GR-132 entry point.
Our way to "Las Hayas": From the restaurant "El Jape" we walk back along the main road and branch off to the chapel "Ermita Virgen de la Salud". The destination of today's stage "Las Hayas" is already written here. Behind the small chapel, the path leads past a house with bright blue railings and a small dam. The path climbs leisurely and we cross the road several times. When we pass beehives and through fenced plots of land on a small hill we come to an asphalt road again, we turn left there along the chain link fence in the direction of a small radio tower (waypoint 7, we ignore the other signposts to "Las Hayas". this place).
The paved road soon becomes a field path and there are views of the gently rolling landscape to the left and right - a stark contrast to the terrain that we hiked through this morning! In a pine forest it goes downhill for a short while. There a path branches off to the left back to "Arure" (waypoint 8). This one will take us back there tomorrow. But today we continue straight ahead until the first houses of "Las Hayas" appear and shortly afterwards we meet the main street. From there we continue uphill to the center of the small town.

Arure: The bus stops right in front of the "El Jape" restaurant. From here you can return to "Valle Gran Rey" or to "San Sebanstián" if necessary. In addition, you can of course also take a taxi back to the "Valle Gran Rey" and share the taxi with other hikers if necessary. There are also a few accommodations in Arure, so with a bit of luck you can save yourself the "detour" to Las Hayas and thus shorten both stage 2 and stage 3 by an hour each.

Las Hayas: The place "Las Hayas" is only one bus stop away from Arure on line 1 and thus offers the same connection options.

The Pension Jardin las Hayas consists of a main building in the center of town and the apartments, which are a few minutes' walk away (Link: Jardin read Hayas).
In the main building - the "Casa Efigenia" - is the reception and the vegetarian restaurant. The guest room is more reminiscent of a somewhat outdated youth hostel or mountain hut, but the kitchen is genuine, guaranteed without preservatives or flavor enhancers and also very cheap (menu approx. 10 €).

Other than the restaurant, the apartments and rooms are up to date, clean, well-kept and comfortable!
Located in a small garden, apartments, terraces and rooms alternate with each other. After a strenuous day of hiking, you can enjoy the evening sun here on beautiful garden furniture!

In Las Hayas there are other accommodations at booking.com. When choosing accommodation, however, pay close attention to the location: "Las Hayas" is not an independent place with just over 100 inhabitants, but belongs to the municipality of "Valle Gran Rey" as well as the districts "La Playa" or "La Calera", which are directly at sea level " (goal of stage 1).

When booking accommodation, we also recommend: our tAbellar planning aid.

The restaurant operators of the "El Jape" restaurant also rent two small apartments in the village under the name "Rural Gomera" (Link: Rural Gomera). The apartments are simple but very clean and offer very good value for money. The slightly shorter route speaks for an overnight stay in Arure (Las Hayas is not directly on the GR-132): The time saved in this way can be used, for example, by starting stage 2 in the afternoon and enjoying the amenities of Valle Gran Rey in the morning (Swimming at the natural beach "Playa del Ingles").